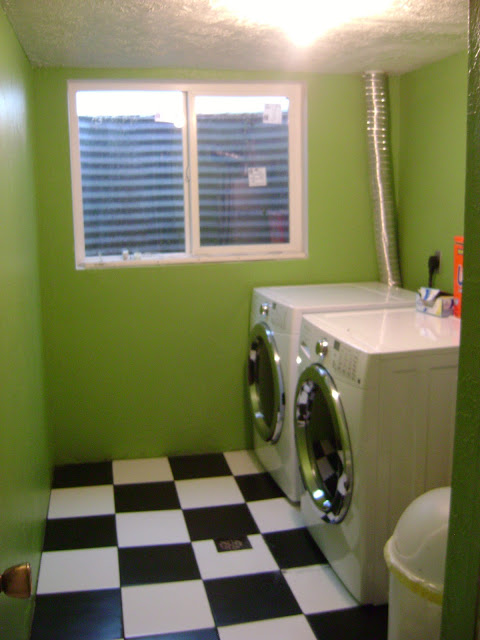 I figured it was high time to show you our updated laundry room! We hadn't planned to do some work on it for a few years, but it seemed like a perfect time when we were getting our "ancient" hot water heater replaced. Michael planned everything perfectly so that the hot water heater would be removed on Friday, and we could spend the weekend re-doing the floor and painting before the new hot water heater would be installed on Monday. It was an incredibly busy weekend, but well worth it because it's so nice to now do laundry in there! 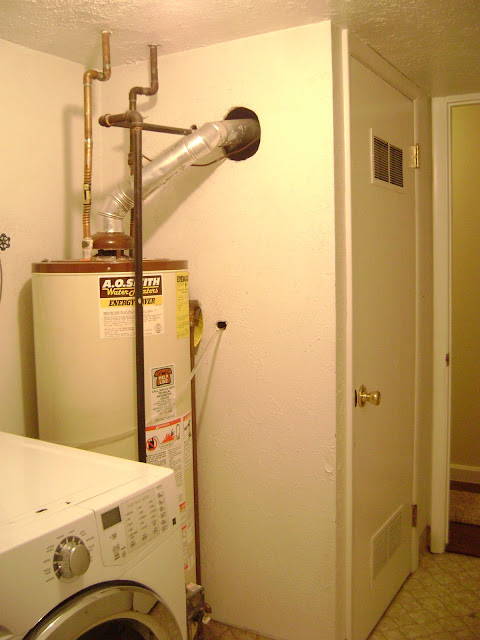 Say goodbye to yucky old hot water heater that was made in 1992. I was so glad to get rid of that icky brown/beige color combo. 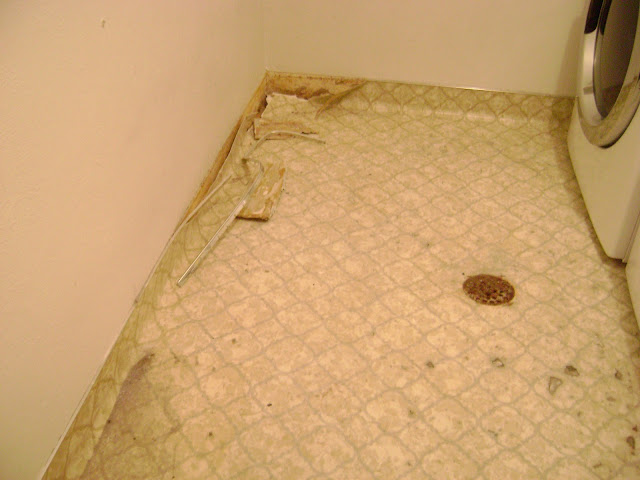 We also bid farewell to linoleum which was original to the 1976 home. It was a beast to rip out, then we spent hours scraping the old glue off the cement. I'm so glad that is over with! 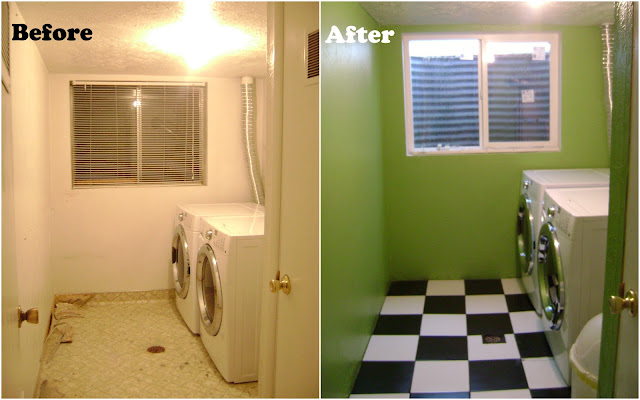 You can't really tell from these pictures, but there used to be huge shelves that partly covered the window and that we ripped out, knowing full well we would never put them back in. They just made the room feel incredibly small and cramped. There were also really cheaply made shelves on the other wall above the washer and dryer, which we also ripped out.

You can see our new windows that were installed around the same time. We decided we like the laundry room without blinds, considering it's in the basement and we need the extra light more than privacy.

We have plans to build wooden pedestals to put the washer/dryer on, and which will be a place to house laundry baskets. Also, we want to build a nice shelf above the washer and dryer for random detergent/cleaning storage. Add some baseboards plus a new light fixture, and we're golden. I know that the laundry room isn't completely finished, but I figured the huge transformation warranted a post, or else who knows when I would have posted about it?!? 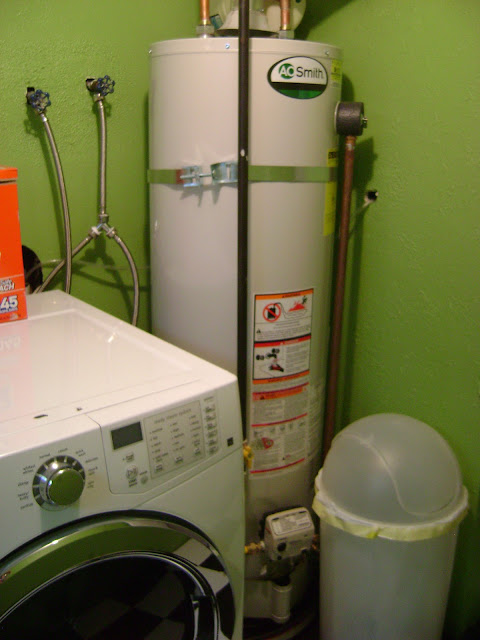 New hot water heater that works incredibly well and isn't filled with pounds and pounds of compacted sediment. I can now resume my ritual of taking a nice hot bath on Saturday nights. Yay! 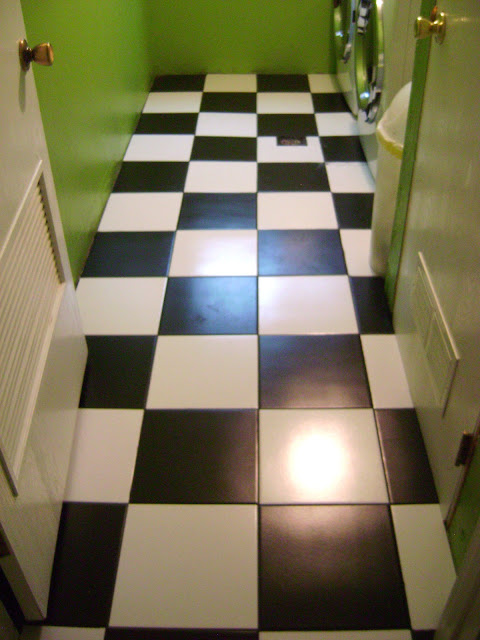 I LOVE black and white checkered tile floors and have been dreaming of a laundry room with them for years. Now my dream has come true!
Posted by Unknown at 1:52 PM 7 comments

So, I have this "Concert Bucket List" that I've never written down, but I've kept a tally in my head for years, just hoping to catch certain performers whenever I can before I (or they) die. I'm sure you're not surprised that I would have such a list, because, let's face it...music makes my world go 'round.

A few weeks ago, I was able to cross off another one of those concerts on my list. It was seriously a dream come true. I went with my mother and one of her friends to see George Strait on his "Cowboy Rides Away" tour in downtown Salt Lake City. Not only did I get to cross off George on my list, but it was a super bonus that Martina McBride, another amazing country singer opened for him! 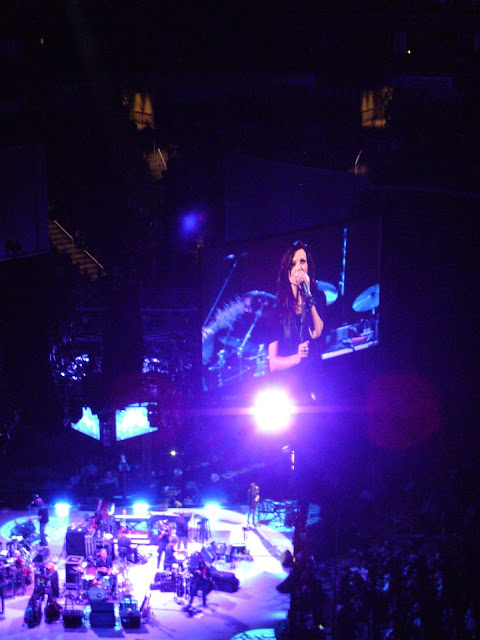 She was beautiful and sounded wonderful as she always has.

But I have to give you some history involving me and George Strait before I show you more pictures. So, growing up in Louisiana, makes me a country girl. I lived in the country and in a decently small town for most of my growing up years, so that basically makes me a country music lover by association. You really can't avoid it when living in the South. To this day, I want to listen to country music whenever the sun starts shining and it warms up a bit in Utah, because that genre of music is what I associate warm weather and sunshine with.

If you don't know, George Strait made this movie called "Pure Country" back in the 90s. It's cute, clean, and filled with LOTS of good music. I grew up watching this movie. Well, the first time I ever watched it was when I was young little girl (about 5, I think). There is this one scene where George is scraggly, unshaven, and has a long ponytail...then he sees an old fashioned barber shop and goes in. Cut to next scene: George walks out, clean shaven and with a short hair cut. Apparently, it was at this moment that I leaned in really closely to the TV, turned around to my mother, and said, "Mamma...he's pretty!"

Enter my lifelong love for George Strait. Not just looks, but music, mind you. 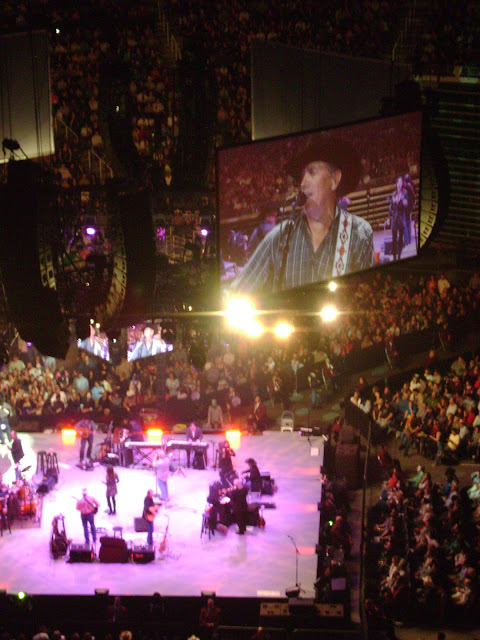 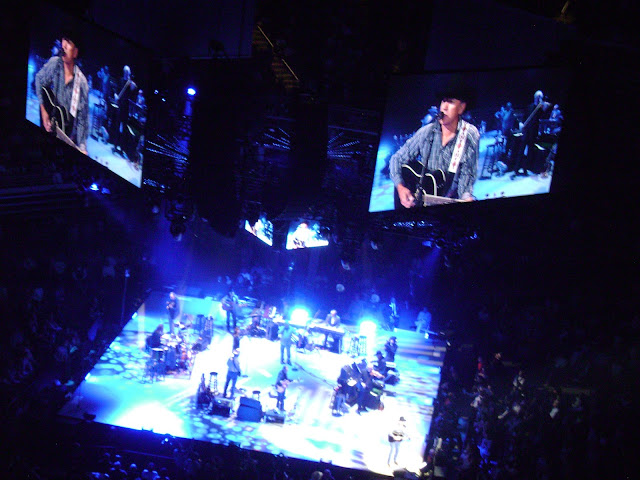 I am happy to say that I was able to see George on what he announced to be his farewell tour. I knew this would be my only opportunity to catch him in concert, so when I found out about the tour coming here to Utah, I requested a ticket from my mother for my birthday present. We sat in nosebleeds, but I didn't care!

I am also pleased to announce that his voice was just as clear and true as it sounds on the radio now, and over 30 years ago when he was just starting out. The man is an amazing performer, and to have a gift like he does, that lasts for as long as it has, is something to note. Good clean living really makes a difference! 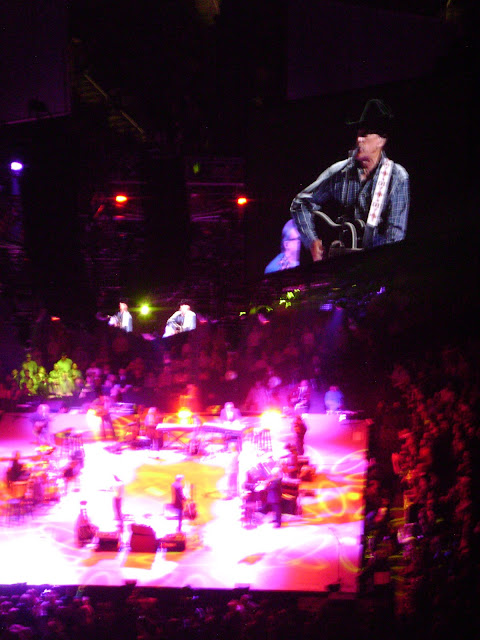 It made me miss the South to see all these cowboys in the arena and in downtown SLC. Only for a George Strait concert would something like that occur and was it a sight to behold!

Here's him singing "Amarillo By Morning" which I cried pretty much throughout the entire song.  Please excuse the poor quality, I was using our little point and shoot to take video. And it takes about 18 seconds before he starts singing.

George sang other classics like "All My Exes Live In Texas", "Heartland", "King of Broken Hearts", "Where The Sidewalk Ends", "Ocean Front Property", "Check Yes Or No"...and many more. He has 50 number ones to choose from, so every single song was a winner. There was even some Johnny Cash and Roger Miller thrown in there for fun. 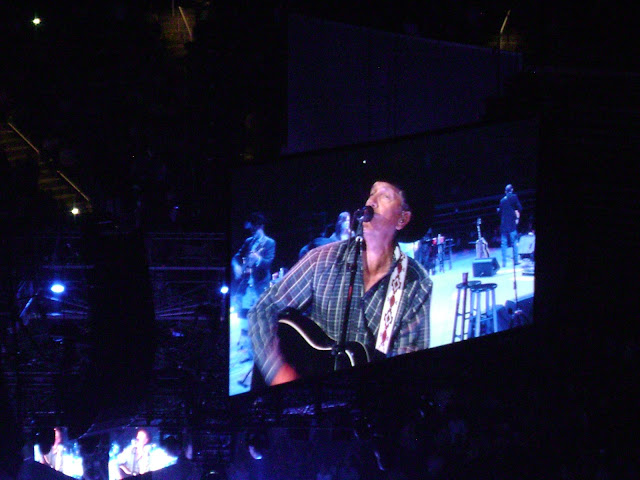 So, with that being said, I leave you with my bucket list (which changes almost everyday) in hopes that it will motivate me even more to cross certain performers off by attending concerts. It really is so fun to see someone perform live. The thrill and rush leaves me on a high for several days after!
Posted by Unknown at 5:59 PM 1 comments