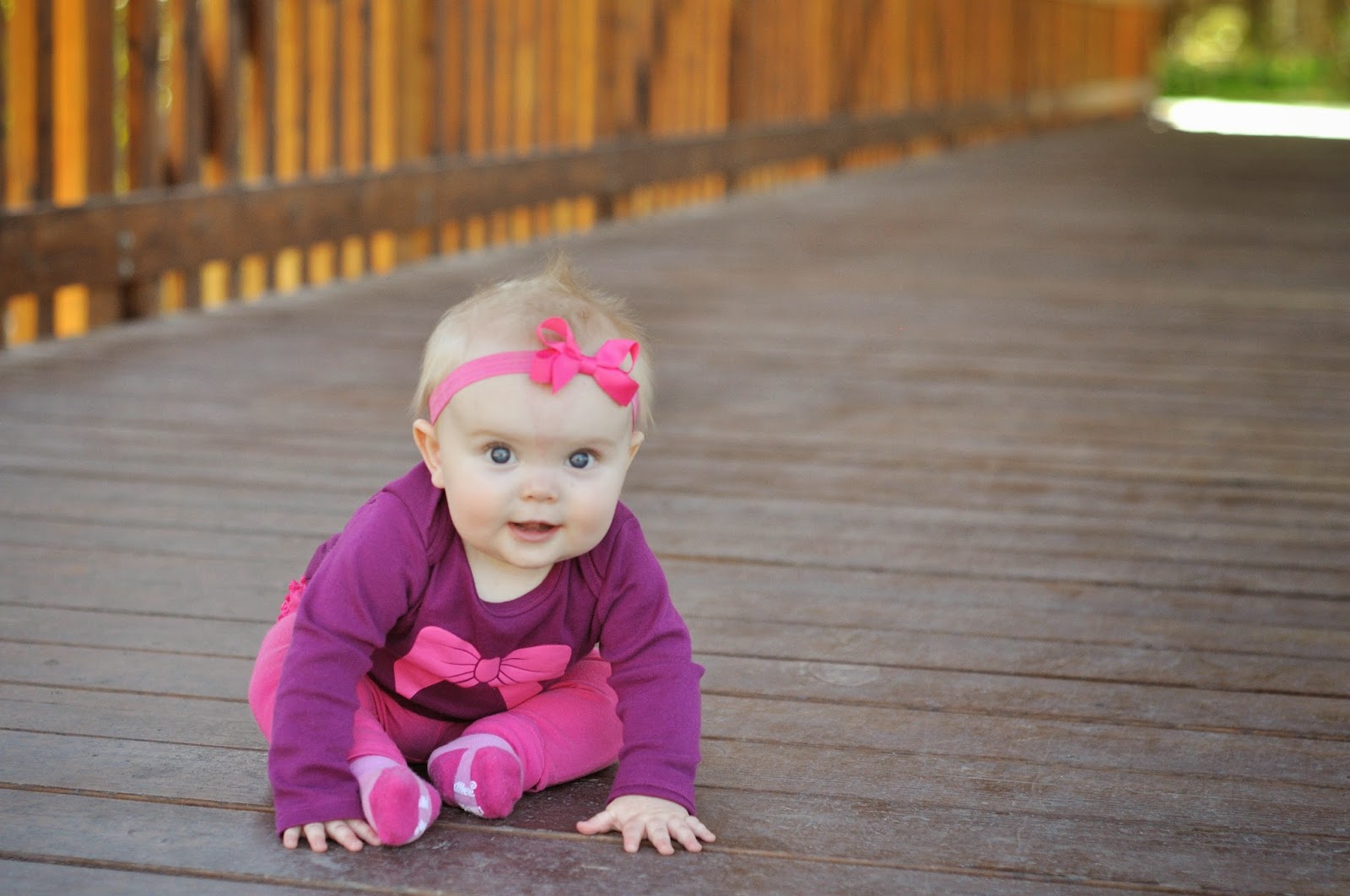 While the weather has been nice and cool, we've been taking walks/runs outside in the mornings and on Sunday afternoons when church is over. One of these Sunday strolls was around the Cottonwood area, on a nice trail in the mountains. Michael has been on bike rides here before, so he wanted to take us there to show how pretty it is. And...he knew there was a gorgeous bridge that would make a perfect spot for us to take some photos of Jessica. What a happy surprise when we got there! 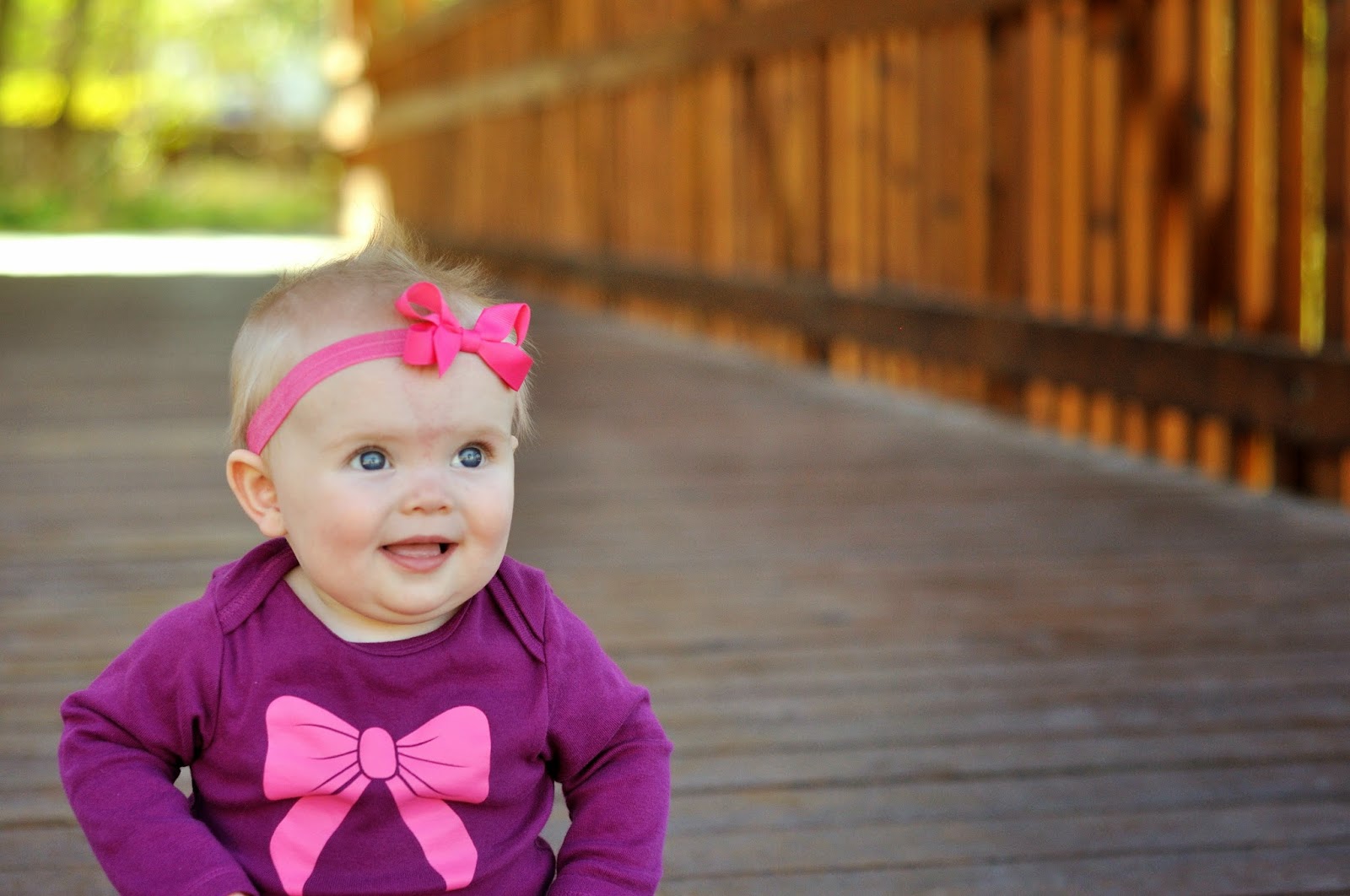 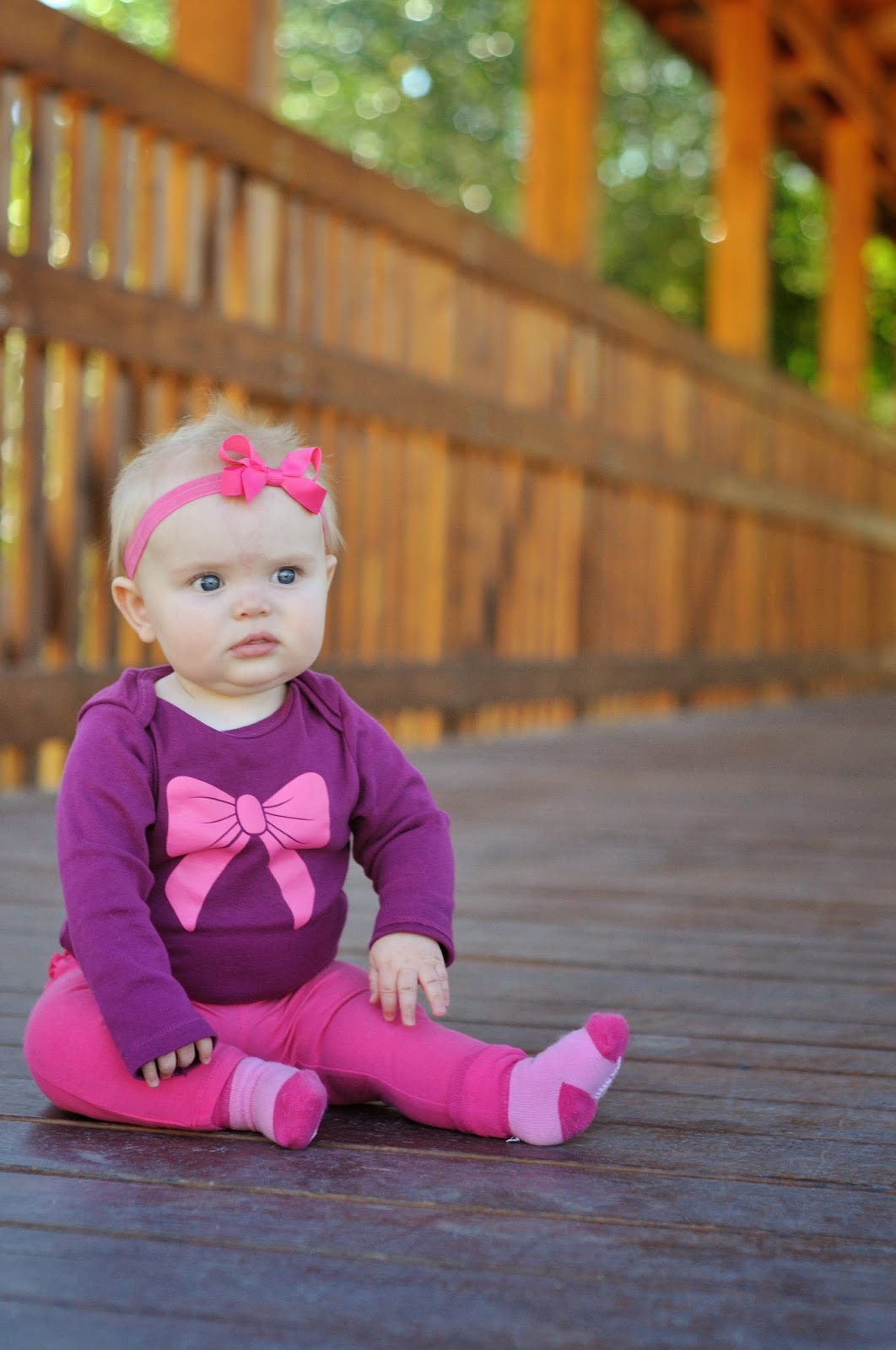 I'm not quite sure what it is about this photo that I love so much. Maybe it's the expression on her face, the way she kinda has her left arm at an angle to her leg, how she's sitting up so straight. But it's cute and full of her personality (drama queen, anyone?). 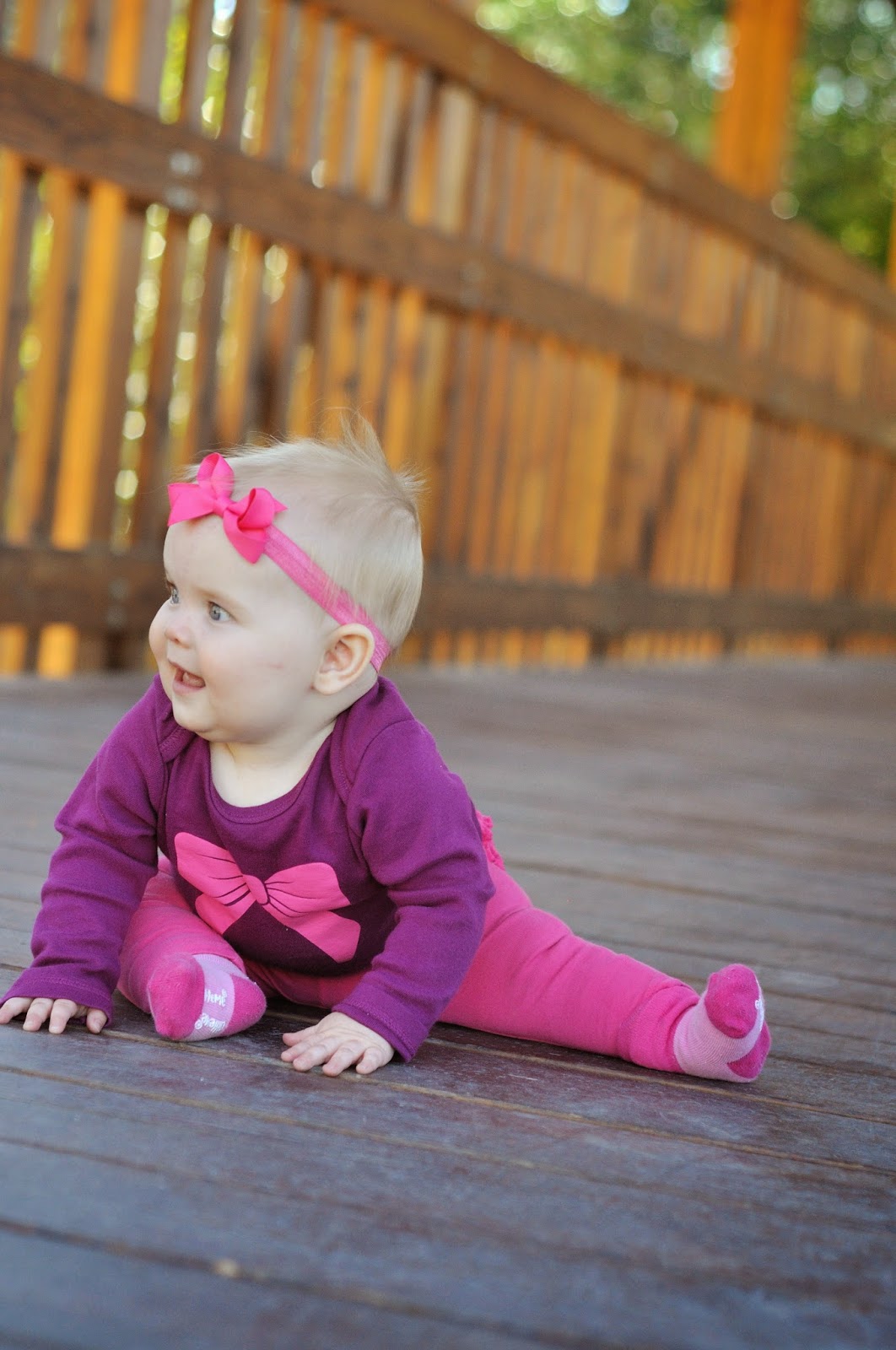 I sure love to take pictures of this girl. I was just saying to Michael the other day that I wonder if now, being in the digital and smartphone age, if I'll take as many photos of our future children as I have of Jessica. You know that old saying that you never do take as much of your later children because you're just so busy and don't have time to pull out the camera as often. I'm not sure if that'll be as true today as it was then, because there's no hassle of remembering the camera/film as we always have a way to take pictures and share them through our smartphones. Guess we'll see how it goes someday!!! 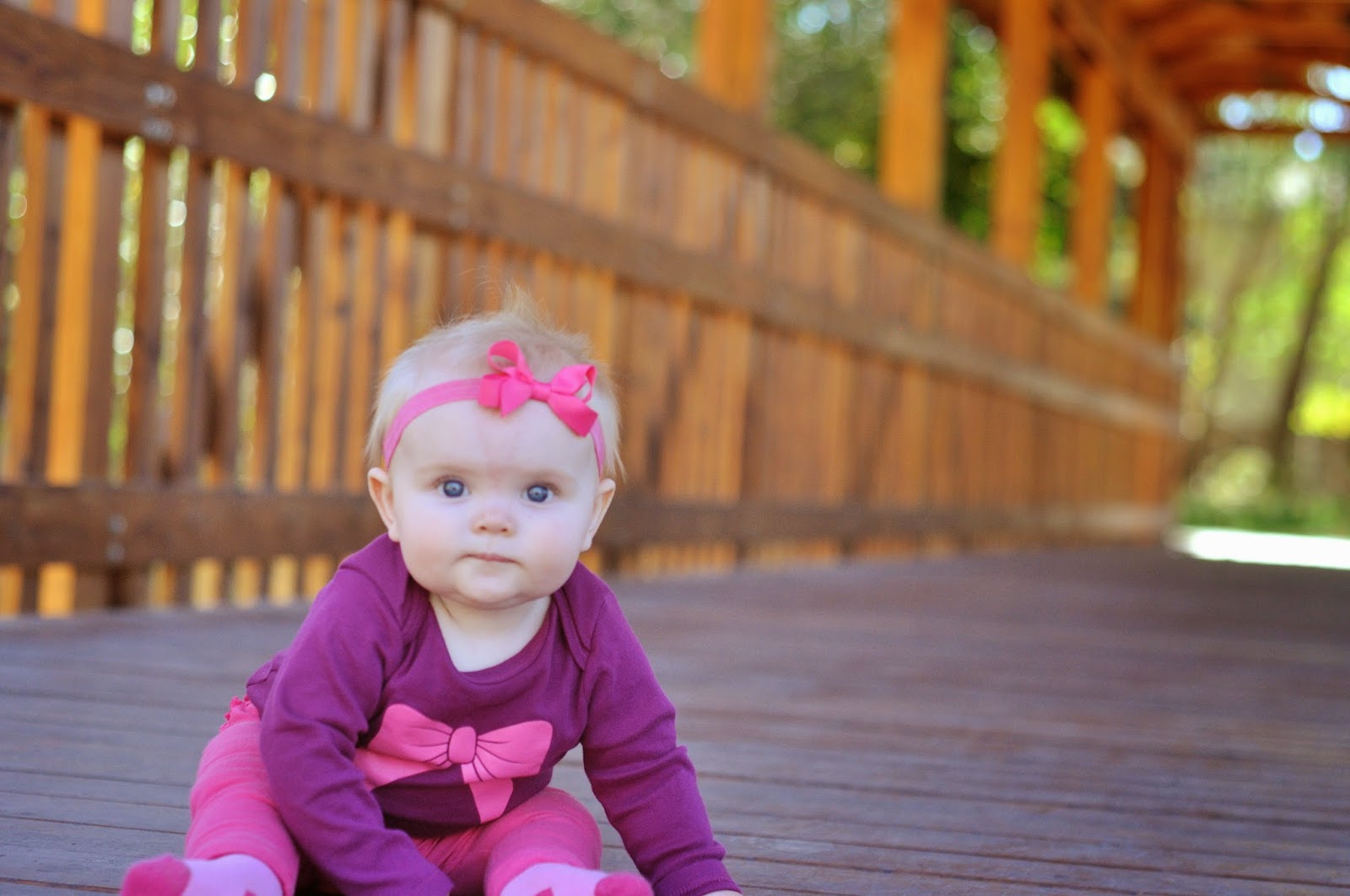 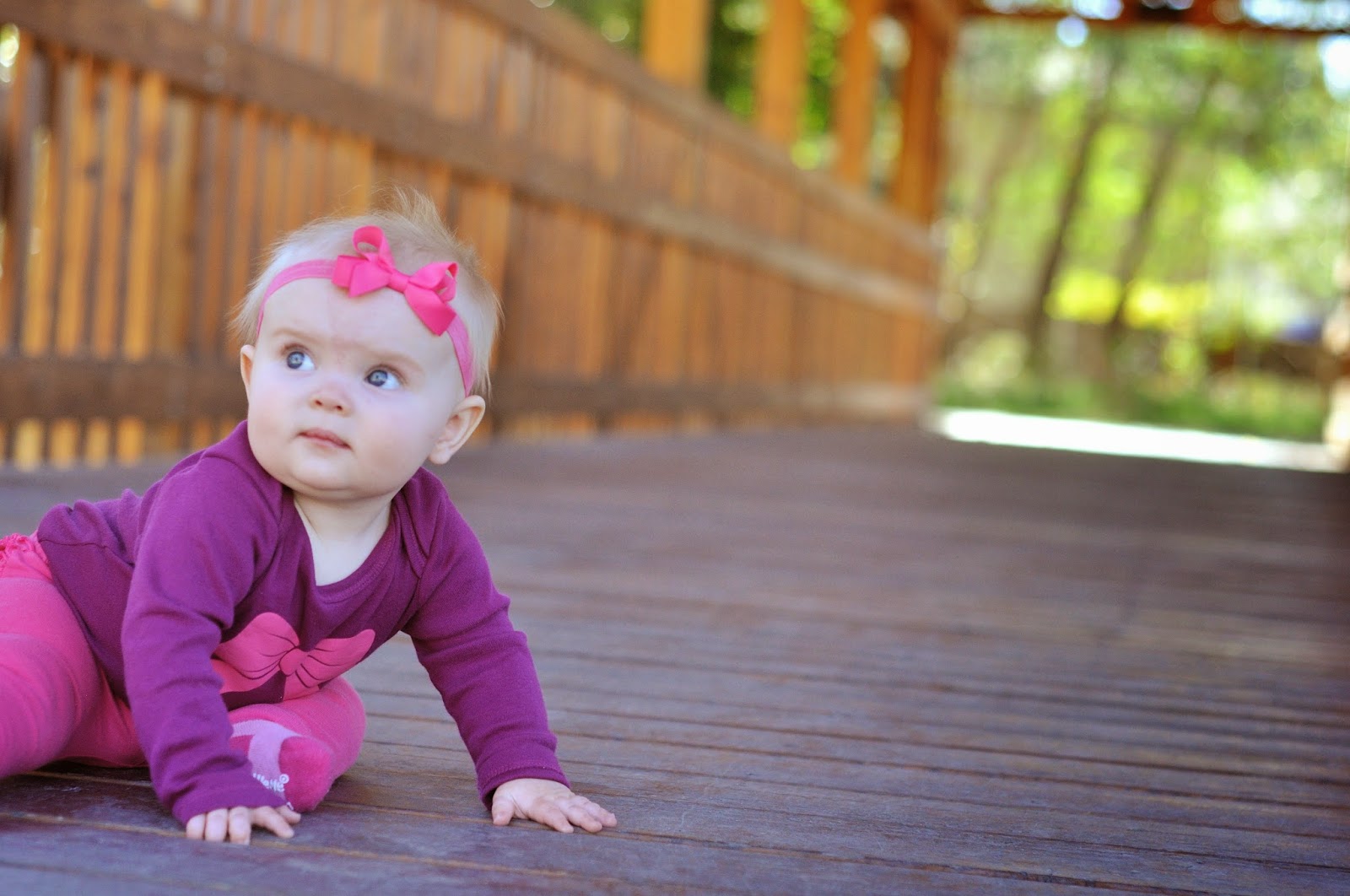 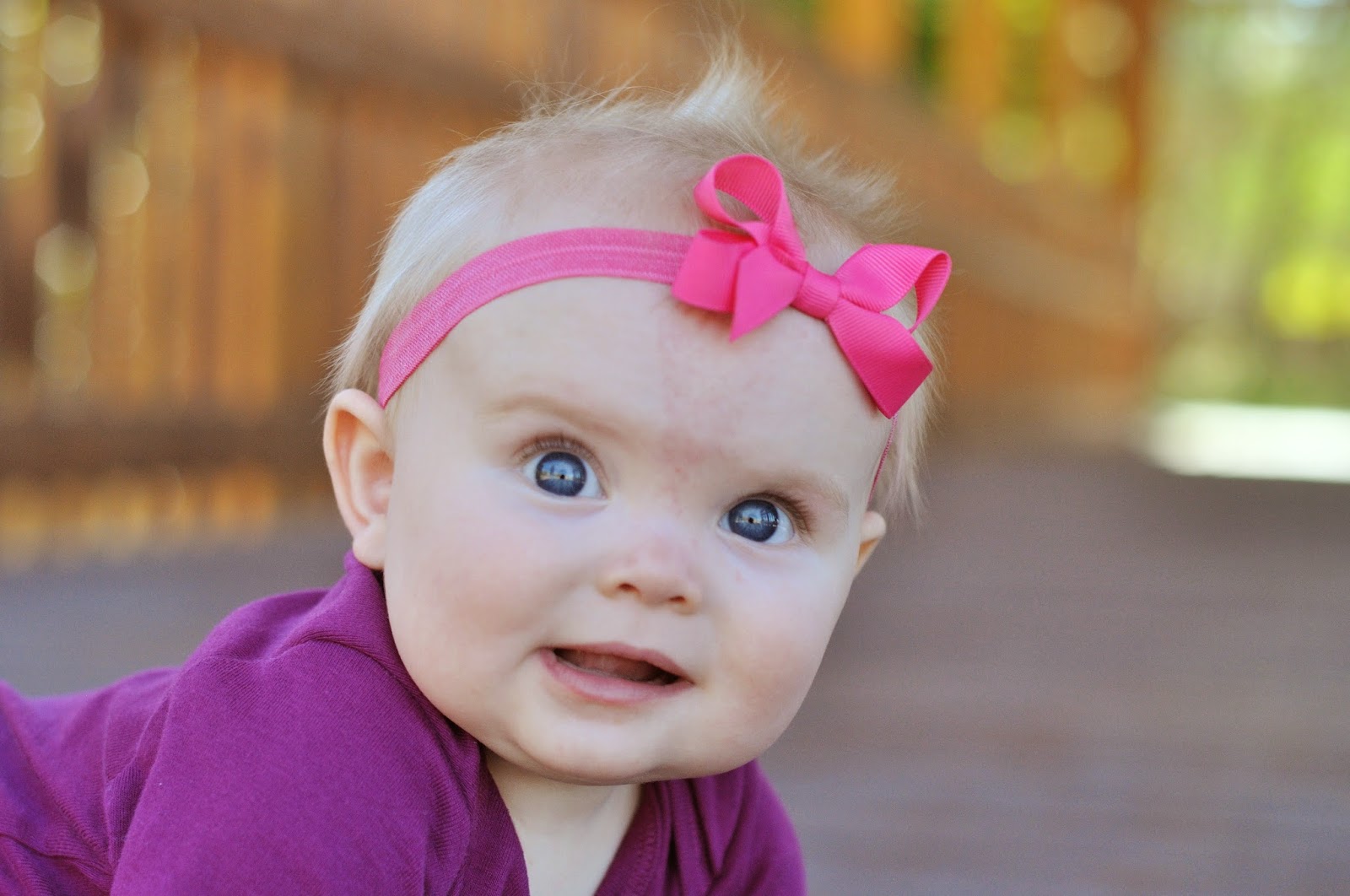 Those eyes...they just kill me. 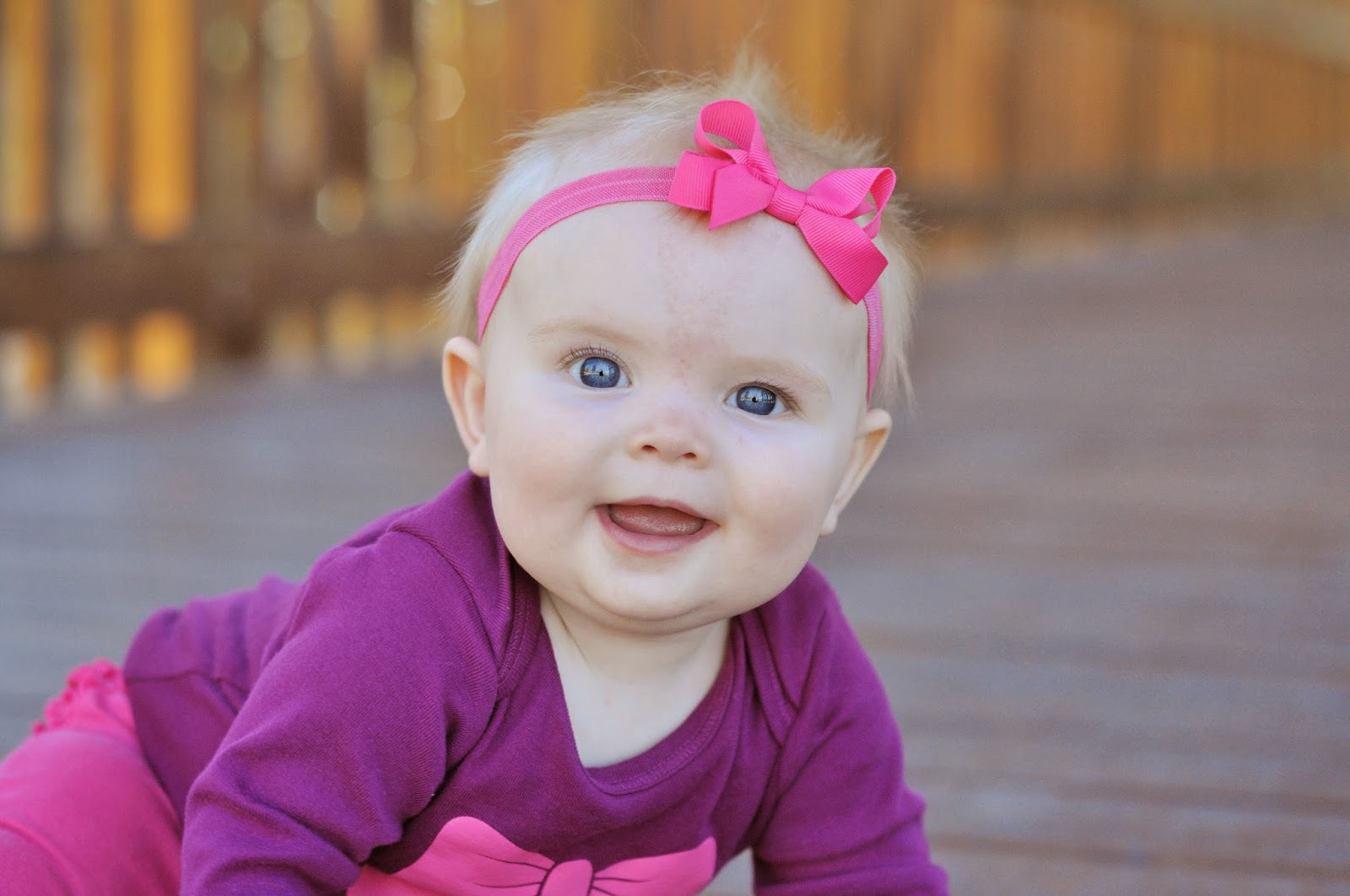 And that fuzzy hair. It's out of control most days, but I kinda love it. 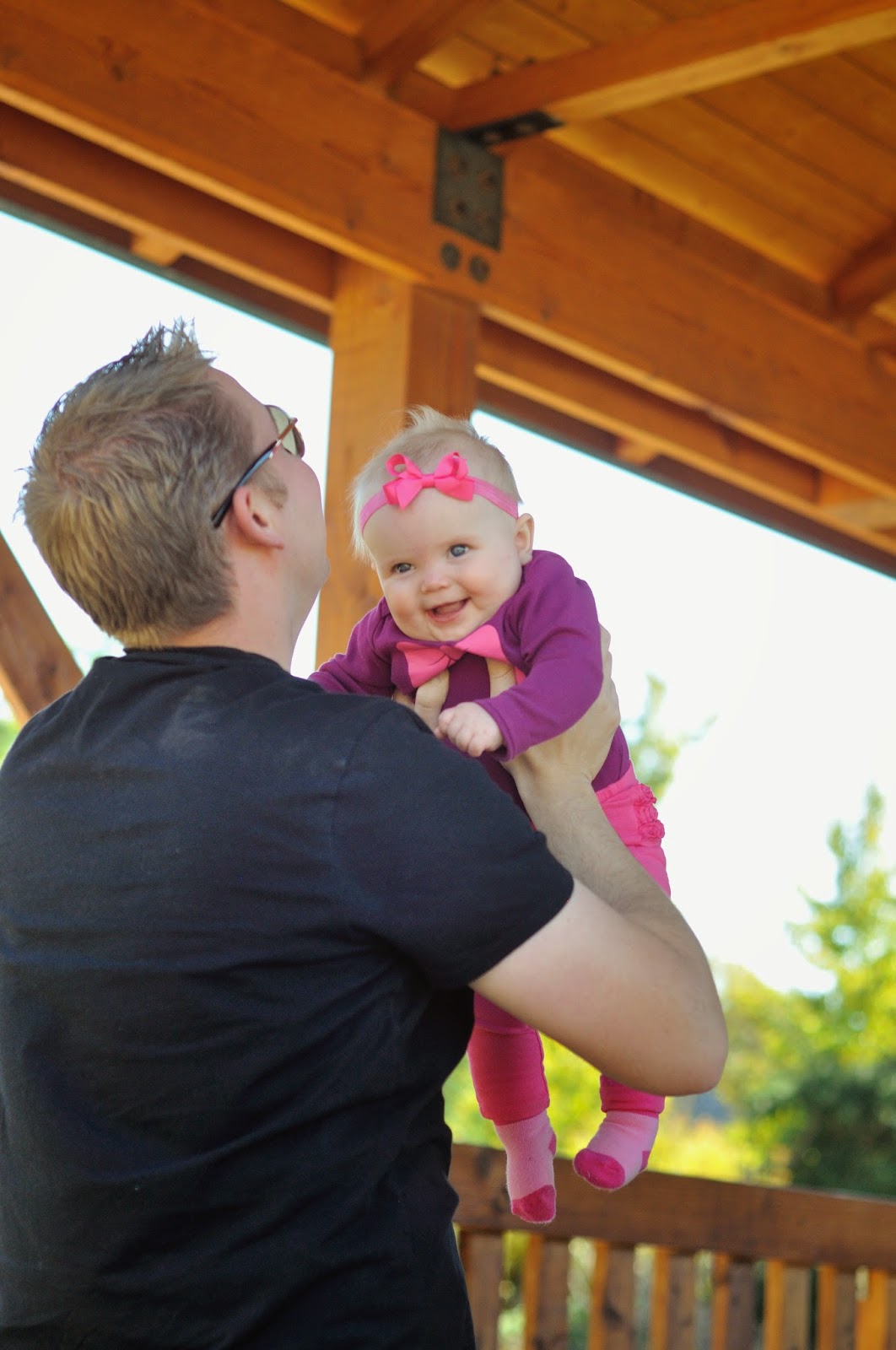 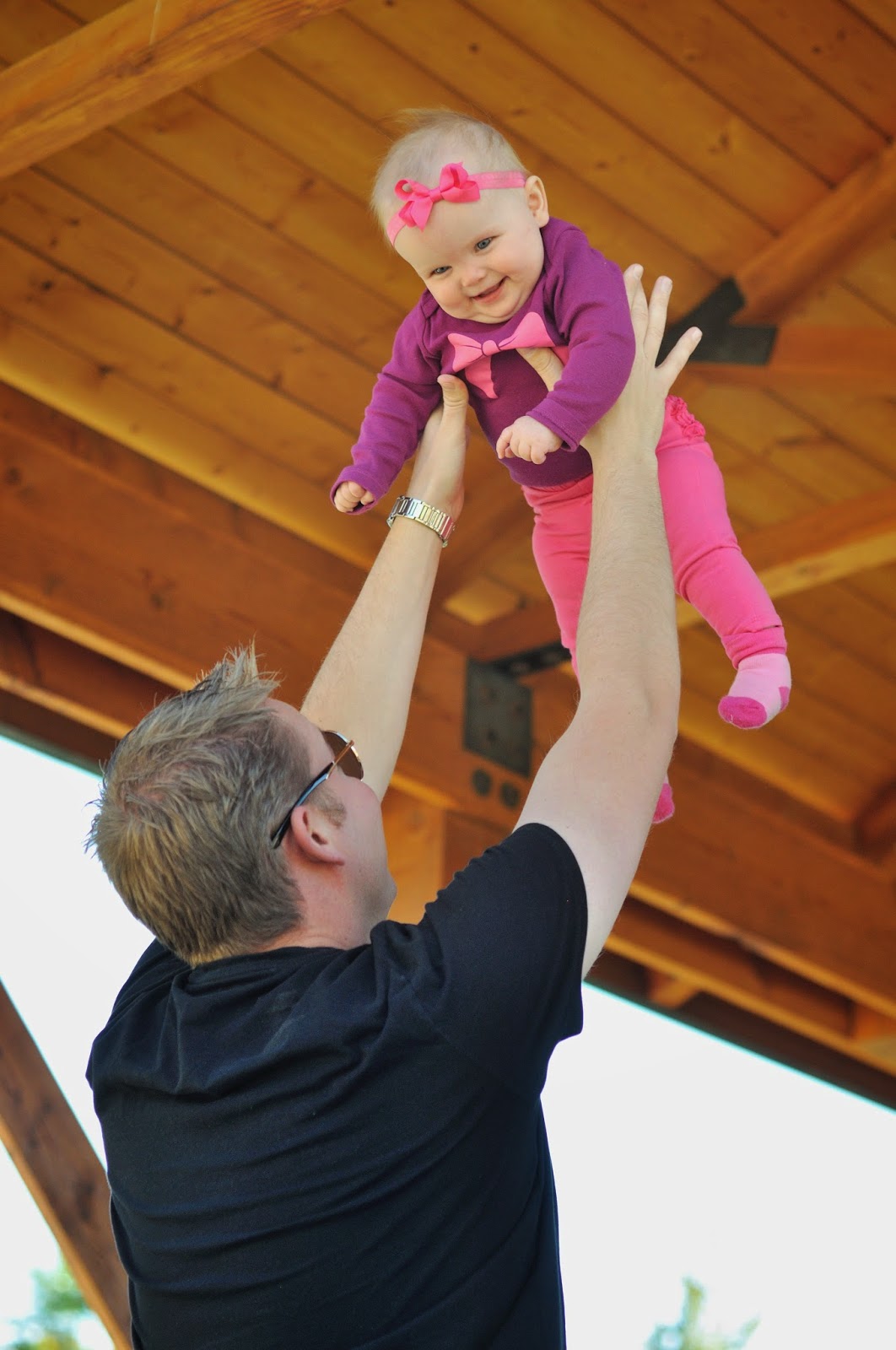 This girl LOVES her "Dada". He is so much fun!

We've been told by so many people how sweet her cry is. It's been described as "muffled", "muted", and "the perfect decibel for a baby to cry". And they are all true, she's not a very loud crier unless she's really scared or hurts herself. She's a bit more of a whiner, which is kinda adorable (at least for now!). Even though she talks a lot, we're predicting she's going to be a soft-spoken little girl.

She's crawling! It all happened within the course of a few days. She started trying to scoot on her belly while pushing her legs, then she got her arms more involved, then it turned into a bit of an army crawl. She can get around pretty quickly this way!

Jessica pushed herself up into a sitting position from her tummy the other day. We almost didn't realize it happened even though we were watching her at the time. It hasn't happened again since that first time, but what a big girl!

She's eating all sorts of solids nowadays. Favorites are bananas, sweet potatoes, beans, and pretty much anything new. She gobbles up new flavors and has never turned her nose up at anything. I'm quite impressed and hope she continues to love food and exploring new flavors as much as her mother does.

The pincer grasp is pretty much mastered and she's quite good at picking up food and getting it in her mouth. That doesn't mean that her meals aren't messy, though! Oh, to be a kid again and to actually have an excuse to play with your food! 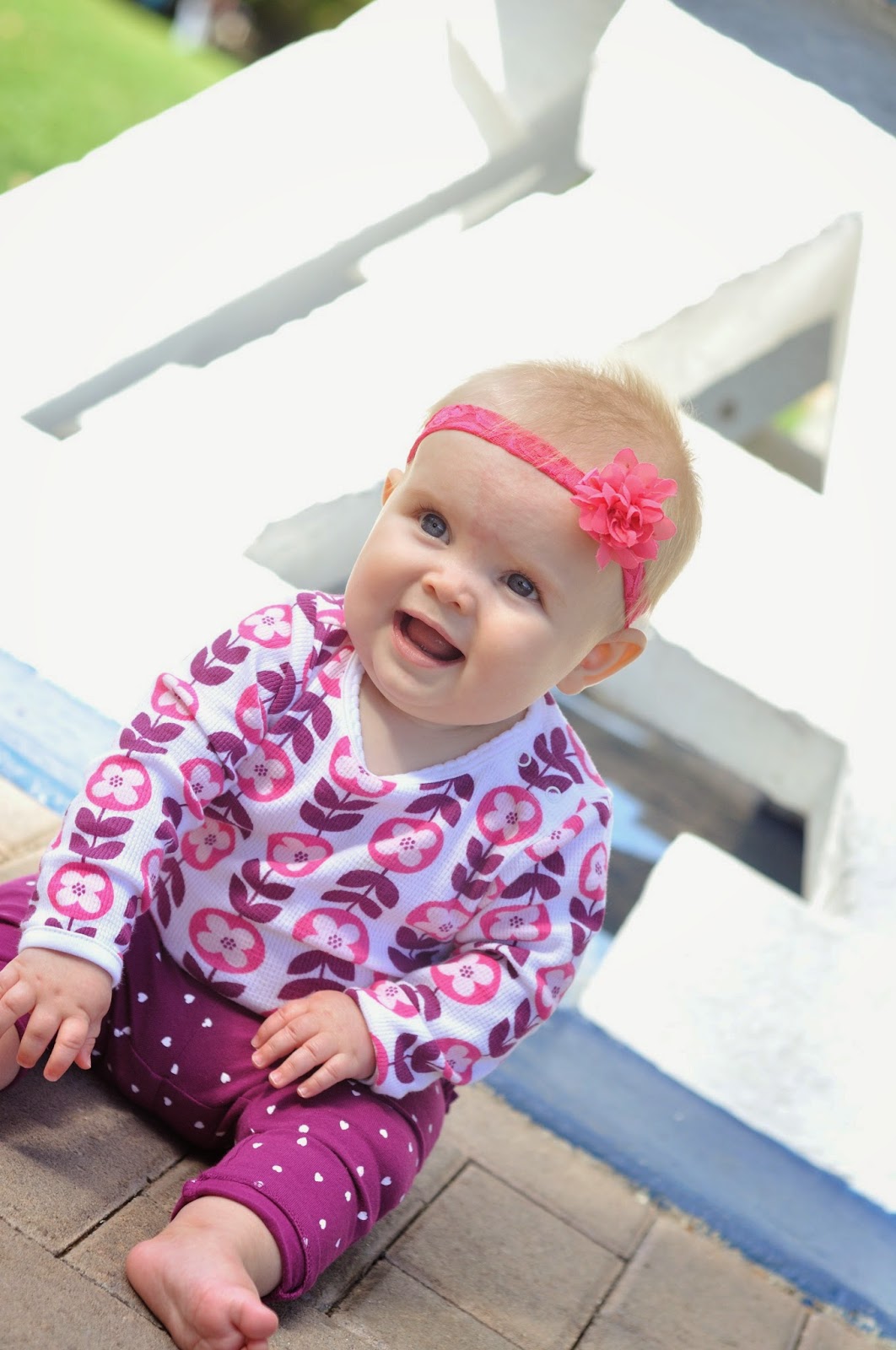 A few weeks ago, right around the time Jessica turned 8 months old, our little family took an overnight trip up to Logan to spend some time at our old stomping grounds. Michael had volunteered to do some recruiting for Intermountain Healthcare and so Jessica and I tagged along. We were able to stay one night free at University Inn, which was incredibly nice, especially since Michael upgraded us to the king-size bed in our room. Also, a stay at the University Inn gives you a free scoop of Aggie Ice Cream (Aggie Blue Mint is the best)!

I was very impressed with how family-friendly the hotel was. The room was designed with an extra sink area outside of the bathroom (in addition to the sink also located in the bathroom). Our pack'n'play fit perfectly inside the bathroom. That made for a prime place for Jessica to sleep. I was able to hang out and watch TV while she napped and also, Michael and I were able to stay up later that night and have some time to ourselves without worrying about waking Jessica up when we eventually got ready for bed. It was meant to be! 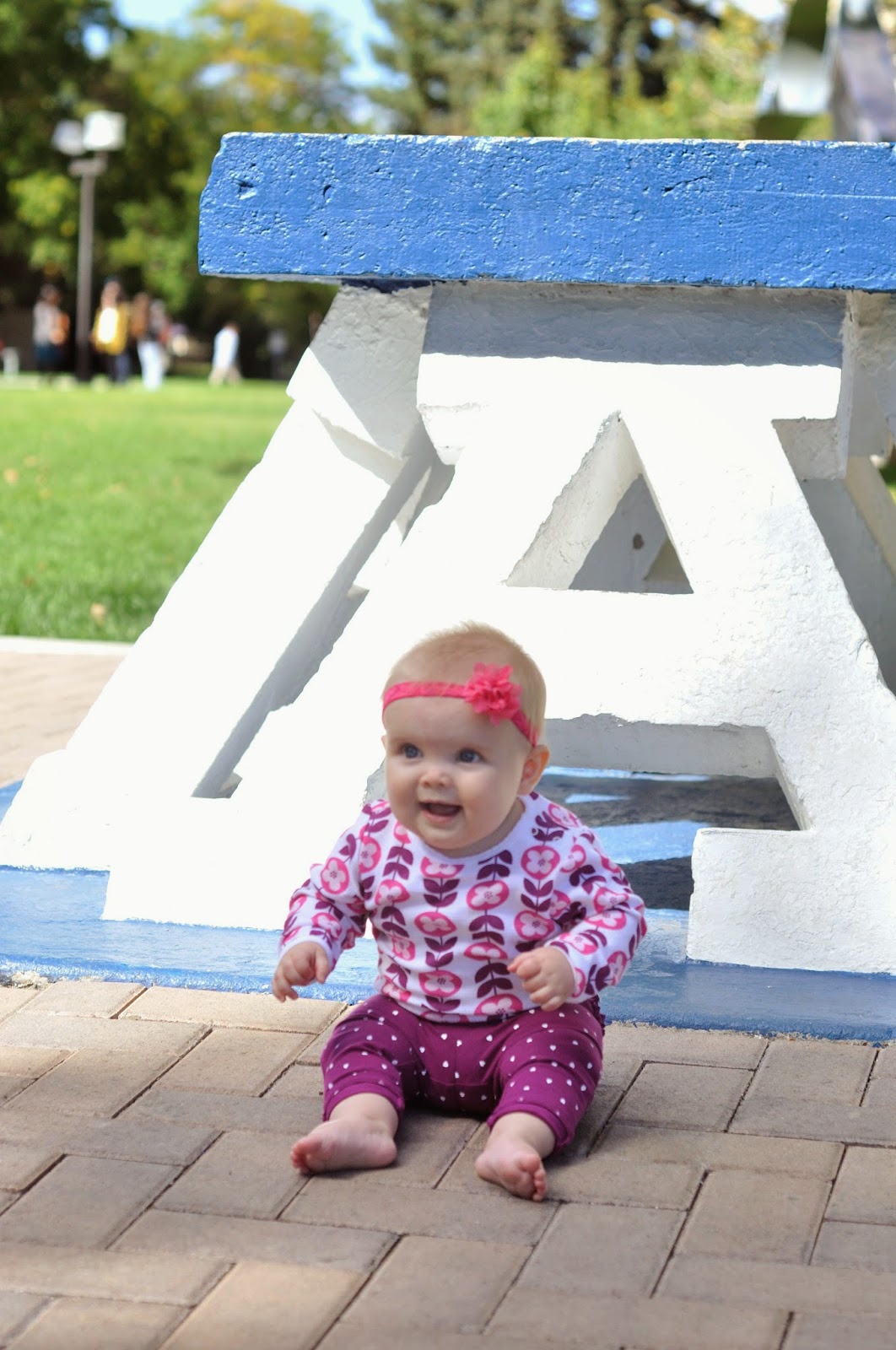 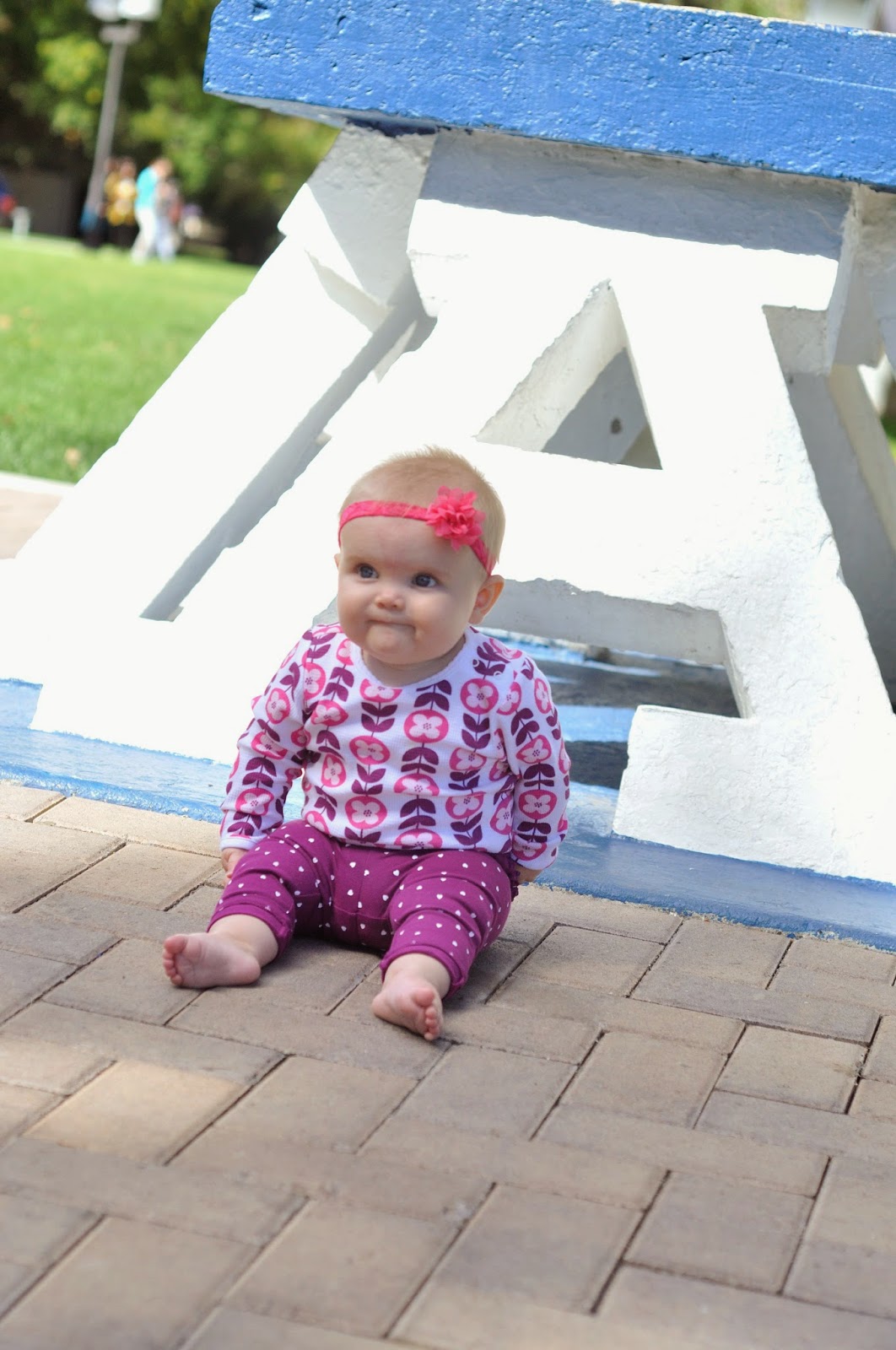 While Michael was doing his recruiting, Jessica and I walked around campus, and visited some old friends. It was beautiful weather, with crisp and cool temperatures. Made me miss the Autumn season there and brought me back to many memories while studying at USU. Michael and I made sure to get some pictures of Jessica on the "A" before we left. Our little girl is already an Aggie at heart! 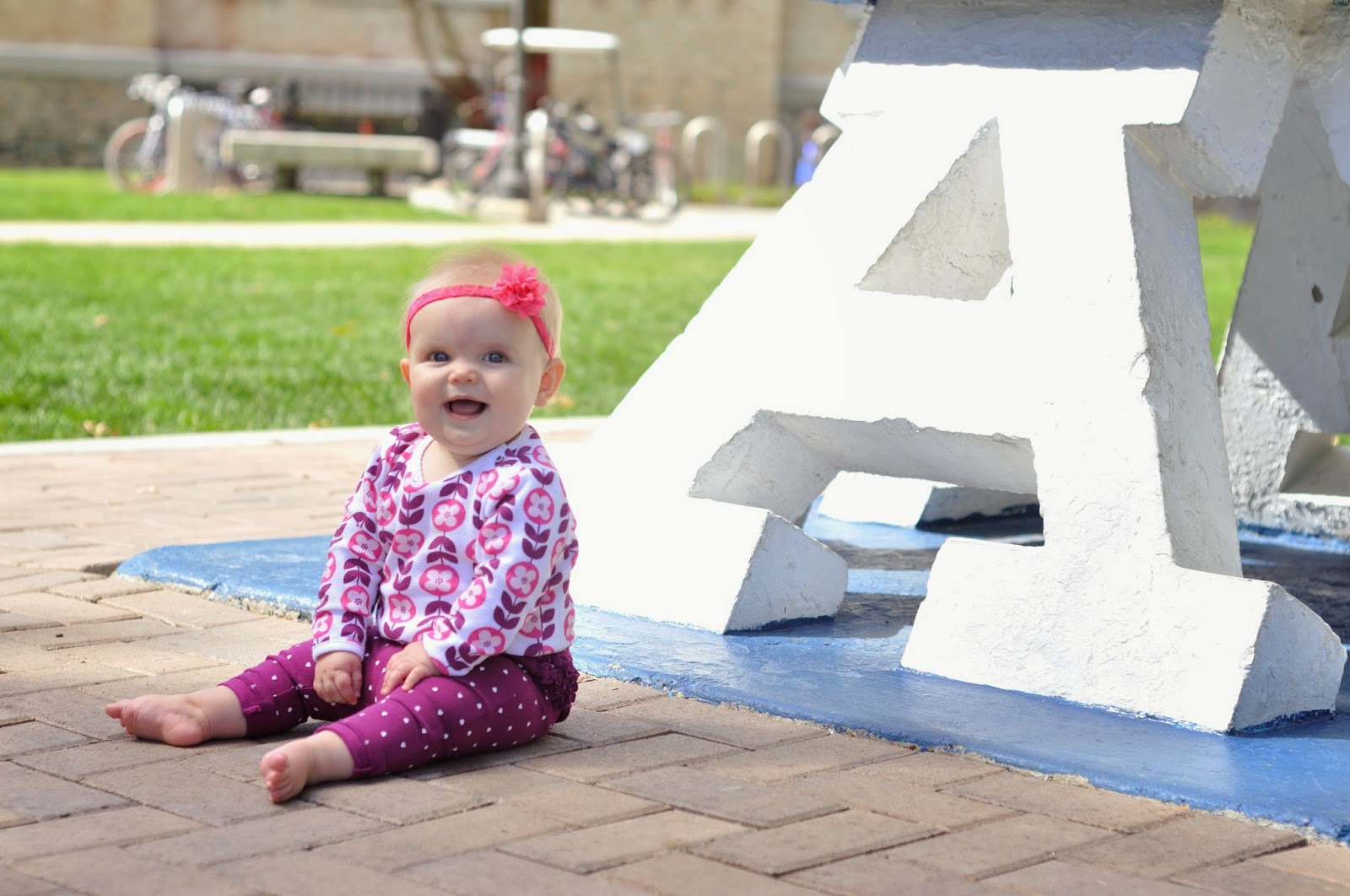 These pictures basically count as her 8-month photos. And aren't they just adorable?!? 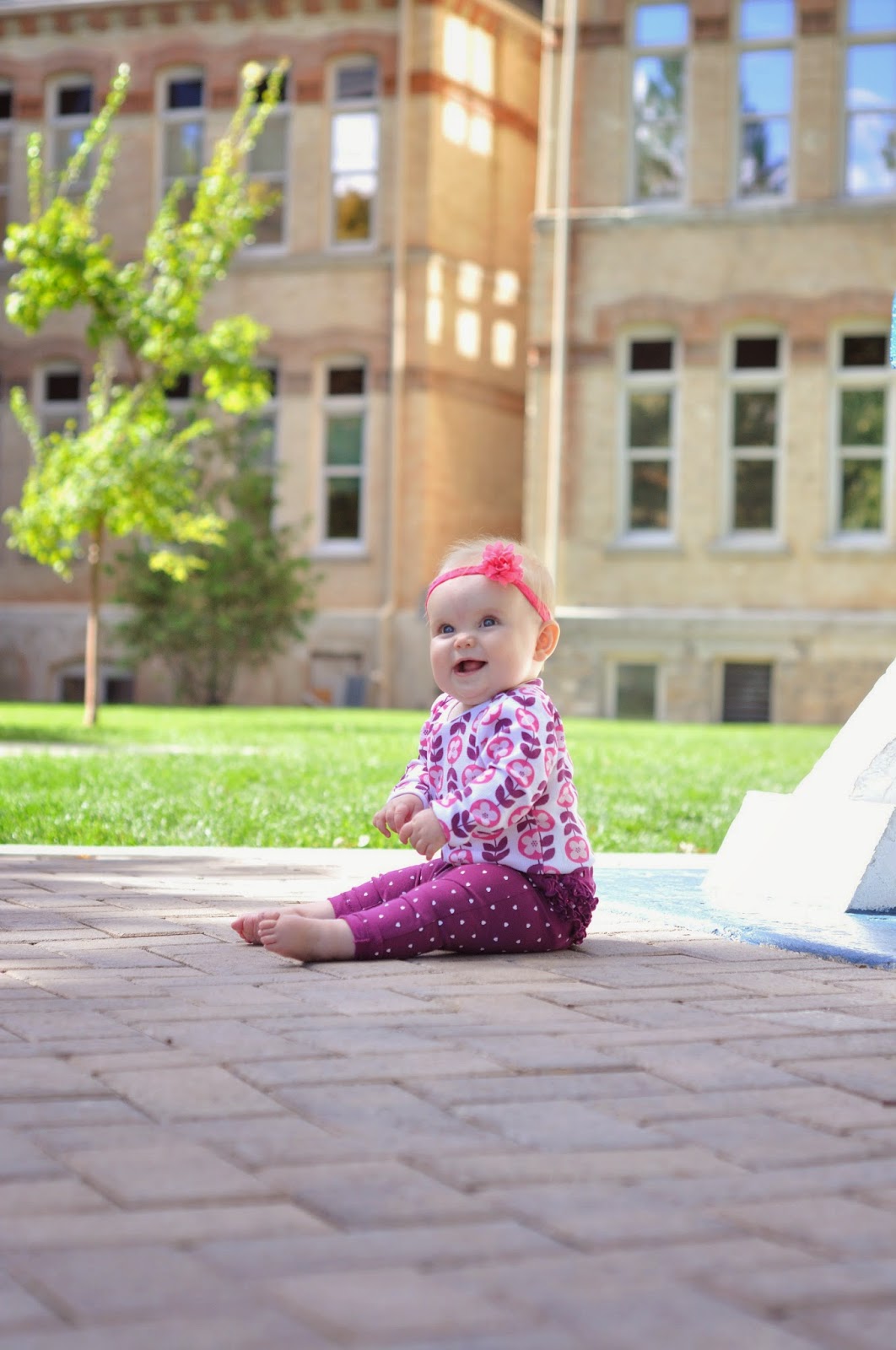 I love how she's looking at her daddy. Jessica just loves him. 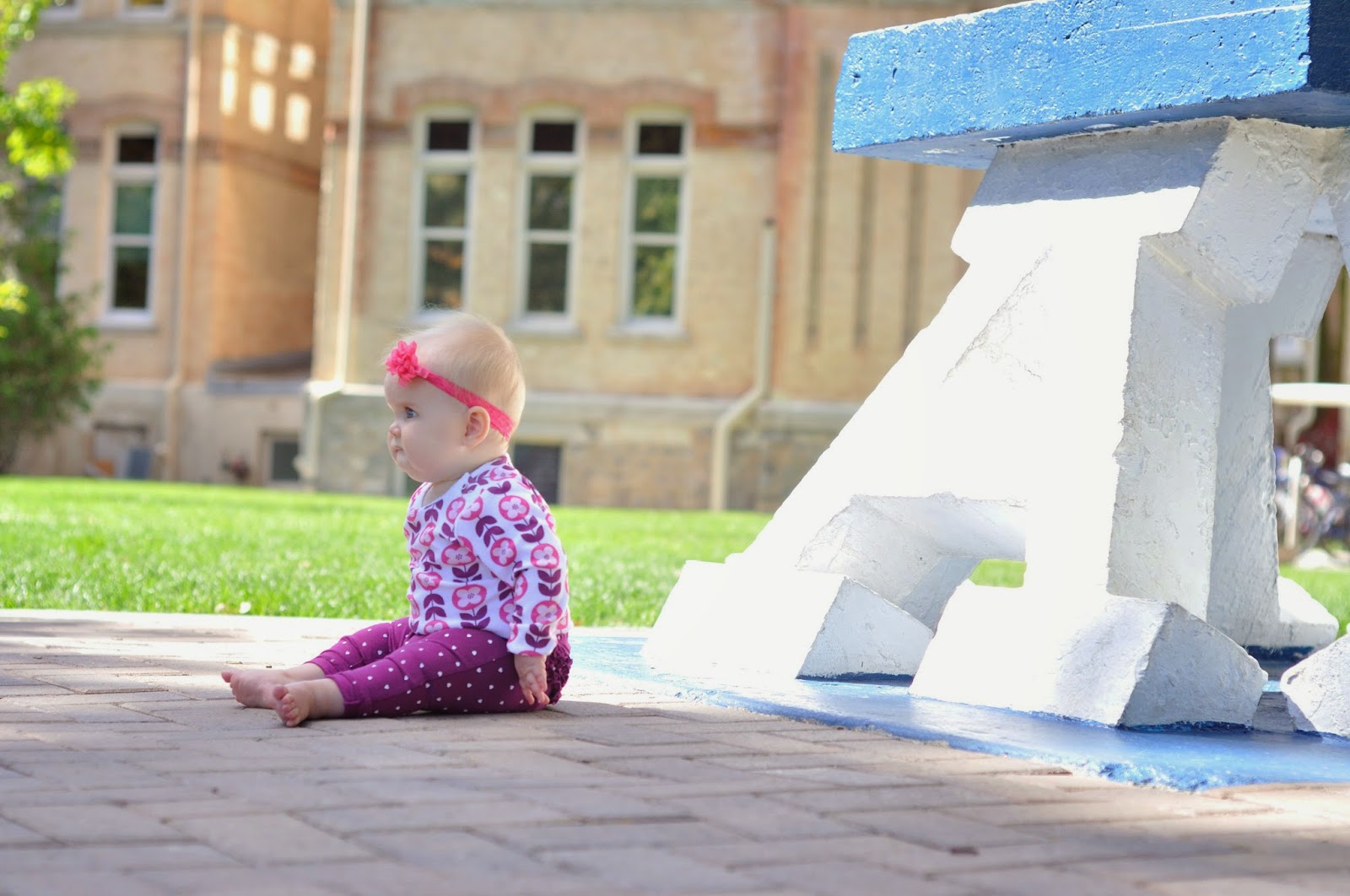 That cute little baby body. And you can really see her chubby cheeks from the side. Her little nose and mouth kind of disappear in all the chunkiness!

Exciting Updates:
Her hair is growing longer and coming in thicker. And she is definitely a blondie!

Jessica has started "singing" during some of my voice lessons. The other day, she did it loudly and proudly while I was doing warmups with one of my students. We both started laughing and had to compose ourselves quite a few times. So cute...but a little disruptive!

Jessica will also try to imitate me when I sing sequences of high pitches. Her little vocal chords can hit those notes with great ease! My girl is on her way to becoming a great singer :)

She talks and uses the words "dadada" and "bababa" all day long. And these words are in all sorts of pitches, with inflection, and even sometimes in a whisper (which is my favorite). Can't you just hear a cute baby girl saying "dadada" in a quiet little whisper? One of the sweetest things ever.

This girl laughs all day long, and many times just to herself for funny things she does. She is so happy all. the. time.

I love seeing how Jessica is learning new things. You can actually see the processing and comprehension in her eyes when she is focused on something.

Jessica is growing up so quickly, and into a beautiful and precious girl. We are so proud of her every single day.
Posted by Unknown at 10:36 PM 1 comments